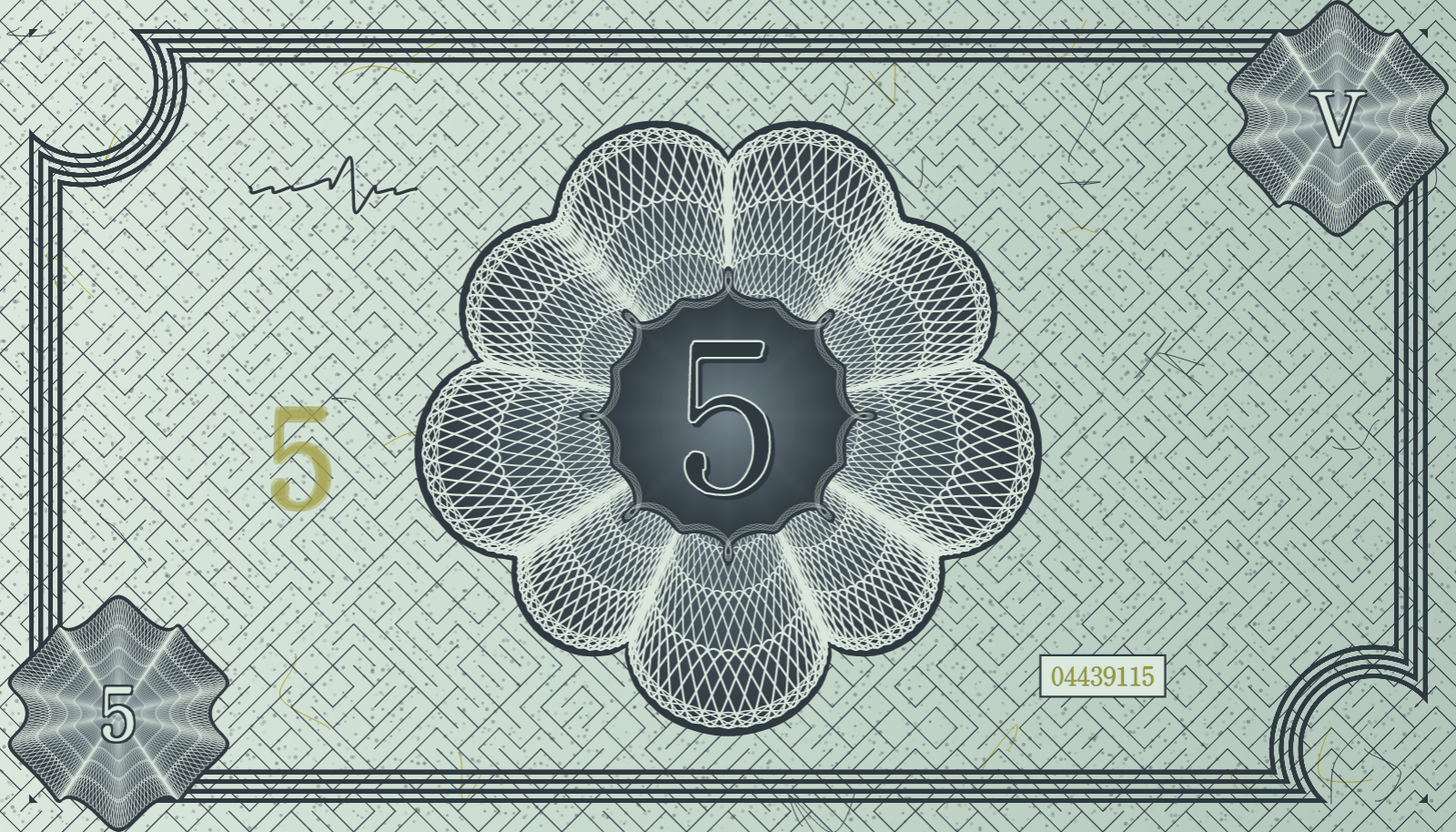 Not quite legal tender...

Steve Pikelny, is a Brooklyn-based software engineer and multimedia artist whose work is catching fire amongst the generative NFT community. I sat down to talk to Steve about Fake Internet Money, which is his third project on Art Blocks.

CryptoGateway: Steve! Thanks so much for joining me once again!

Steve Pikelny: Of course. The pleasure's all mine!

CG: Last time we spoke it was about your previous artblocks project, CryptoGodKing. It's since turned into a cult-classic of sorts. Your sophmore generative art effort, I Saw It in a Dream, was also highly successful, and is really a beautiful project.

SP: Thank you so much, that means a lot!

CG: So with two generative art projects under your belt you've decided to tackle generative paper currency, which is an interesting choice! Paper currency design isn't typically what I think of when I think generative art. What led you to that decision?

SP: First and foremost, I'm a huge fan of paper currency design. Whenever I go to a new country I'm always really excited to take home a piece of their money as a souvenir. I just love staring at the intricate geometric designs on them and appreciating their diversity. So given how much I like the aesthetics and how much I enjoy collecting it, I thought it fit very well into the generative NFT space and I had a strong desire to explore it.

CG: It really is a cool aesthetic, and I think you nailed it. The balance between the abstract and the concrete is also very interesting here. On one hand, it strikes me as a collectable project because each iteration looks like a real thing with different characteristics. But on the other hand, a lot of the components are very abstract and unique. It's almost like they are generative art pieces within a generative art piece.

SP: Yeah, that's definitely one of the reasons I chose this project. As far as I can tell, paper currency was actually an early canvas for generative art. The sort of webby, geometric pattern that appears around the edges of US currency, which is called a Guilloché pattent, started appearing on US currency in the 1800s as an anti-counterfeiting measure. It was generated by this machine called a geometric lathe, which worked a lot like a spirograph. So if you swapped out one gear for another you ended up with a totally different pattern. Ultimately having these intricate patterns proved that whoever printed it had enough resources to own this big, expensive machine -- and as a result, that the bill was authentic.

CG: Generative art to prove authenticity, I like it! On the note of authenticity, the title of the collection is called Fake Internet Money. It definitely stands out and sets an interesting tone. Can you talk a bit about why you chose that title?

SP: There are a couple reasons I chose it. One reason is that it draws attention to the fact that it's not trying to be real money. It really emphasizes the fakeness of it, and in doing so it sort of helps deconstruct the idea of what money really is.

And the other reason is that, as you know, the term "Fake Internet Money" is often used to jokingly describe cryptocurrency. The value of it is very abstract, and to a lot of people it's just an arbitrary number decided by the internet. And really at the end of the day I think this project is about how value is subjective. Whether we're talking about art or money, there's really no cosmic source of truth that determines what "true value" is. So I felt it was important to make that connection.

CG: Those are both really interesting points, and I want to drill into both of them. Can you start by elaborating on the fakeness and deconstruction angle?

SP: Sure. On one hand, I've designed the project to sort of almost look like real money to the point where it's sitting in that uncanny valley space. You look at it, you see the denomination, you see the familiar patterns, the texture, the layout, etc. And if you're not paying close attention you might possibly mistake some of them for real money. But if you look at it for more than a couple seconds, it feels off. You might realize that the sizing and aspect ratios are off, or that things you're used to seeing on paper currency are missing.

And then I take this a step further by adding or removing elements to make it resemble real-life currency less and less. Sometimes I change the layout to resemble a lottery ticket more than a standard piece of currency. Sometimes I use a highly saturated color palette to give it a futuristic-crypto look. Sometimes a "misprint" will throw the whole system into chaos. But despite these curve balls there are enough similarities throughout the collection that they all at least resemble money.

So ultimately you're left with something that's pretty clearly not real money, but the act of questioning why forces you to think about what constitutes money.

CG: Right, and getting back to your point on value, I suppose one has to ask why this project has any value if it proports to be money but is also worthless as money.

SP: Exactly. And I'm really excited to see how the different iterations end up being valued on the secondary market. As funny as it would be to see all the 100 bills going for exactly 100x the price as the 1 bills, something tells me that prices won't line up exactly with what the listed denomination is. These are Non-Fungible Tokens we're dealing with, after all.

CG: What sorts of things do you see playing into that valuation?

SP: Well, I don't want to spoil too much here, but I think it's really interesting to look at cases where in "real" currency markets $1 is worth more or less than $1. Earlier we talked about aesthetics essentially defining whether $1 was worth $1 or $0 in the 1800s. But those same bills, (many of which are absolutely gorgeous) are now worth much much more as collector items entirely because of the aesthetics. Similarly, you have arbitrary rarities like cool serial numbers demanding a premium in the secondary market. And misprints are even more interesting! Even though their exchange value is officially 0, there are thriving markets paying premiums for "worthless" money.

CG: Yeah, and I guess even on a base level, stripping away all the idiosyncracies, the idea that everyone kind of "agrees" on the value of money is a pretty wild idea.

SP: Right, like typically fiat currencies claim to have an "objective" value, which is determined by a treasury, enforced by men with guns, etc. And that's all fine, but really this just acts as a central point of coordination to the larger monetary system in which value is determined by people accepting the money for goods and services.

CG: How many boxes of cereal can I buy with my arbitrary government numbers?

SP: So even though this is the sort of philosophical crisis everyone gets into when they first start interacting with NFTs and cryptocurrency, I think it's really interesting when you start putting together everything we've talked about so far. On one hand, the authenticity of the token is baked in by the block chain, so it removes the need for a central authority to put their stamp of approval on it. But on the other hand, the value of the token is sort of floating around in la la land. There's no single authoritative source saying what any of it should be worth, so it all ends up being socially determined.

And what ends up being the primary driver of value with NFTs? Aesthetics and rare traits. Basically the same things that hard currency collectors at!

CG: Fascinating stuff! Given your history with projects like FastCashMoneyPlus I was expecting more of a focus on the absurdity of current NFT market events.

In any case, I started coming up with the concept months ago, so there's no way I could have predicted the direction everthing would go in. But I think the insanity of the current NFT market is really just an extension of a lot of the themes that we've talked about, so I'm going to chalk it up as a win.

CG: Aside from FastCash, how does this project relate to some of your previous work?

SP: Most recently I explored a lot of these themes through the lense of religion with CryptoGodKing. And I think CGK fans will be pleasently surprised with how these two projects relate to each other. Also, fans of I Saw It in a Dream will probably notice that the core pattern of that project kind of resembles the pattern used inside the standard rosette of this project. That's definitely not a coincidence! It took a lot of experimentation to get it right, so the I Saw It in a Dream pattern is sort of an out take of that.

CG: That's so cool! It's great you were able to squeeze another project out of all the work you did on this one.

SP: It was a happy accident!

CG: Well Steve, it's been great chatting with you, and I'm excited to see how the drop turns out!

Read our interview with Steve Pikelny on CryptoGodKing